WHY AM I BEING TREATED DIFFERENTLY THAN HUNTER BIDEN and the REV. AL SHARPTON?

Uber has been banned in London partly in response to skyrocketing rapes by predominantly migrant drivers which the company did not report to police.

According to Transport for London, Uber’s license will not be renewed beyond September 30, with the first reason listed being the company’s “approach to reporting serious criminal offenses.”

This includes Uber’s failure to report rising numbers of rapes and sexual assaults by its own drivers.

Latest figures show that Uber drivers are now responsible for one sex attack in London every week, with sexual assaults by Uber drivers skyrocketing by 50 percent in just a single year.

This is undoubtedly connected to the fact that many of the drivers are from Muslim backgrounds, where “immodest” women are seen as easy prey. Many of the young women who hire Uber taxis late at night are drunk and in some cases scantily dressed. 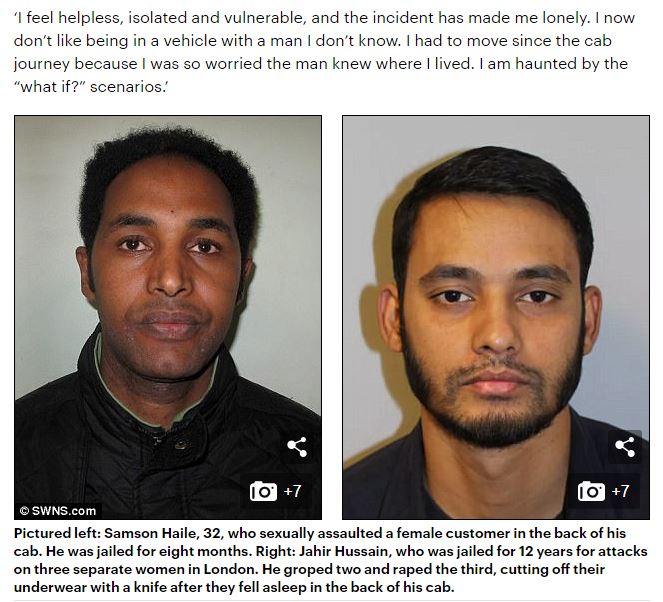 Many Uber drivers are newly arrived migrants or “refugees” who don’t have to undergo the intensive training that traditional cabbies go through.

According to a letter written by Inspector Neil Billany, head of the Metropolitan Police’s taxi and private hire unit, Uber has “been made aware of criminal activity and yet haven’t informed the police.”

In one case, Uber continued to employ a driver known to have committed a sexual assault, before the same man went on to attack another woman.

Uber taxis are also not required to have CCTV installed in the back of the car like black cabs, putting young women at even greater risk.

The battle between black cabs and Uber in London has raged for years, but it has come to be seen in the context of the country’s overall struggle with mass immigration.

According to Transport for London, the majority of black cab drivers are white British, despite that demographic designation itself now being a minority in England’s capital city.

In comparison, the majority of private cab hire drivers (including Uber) are “Asian” (which mostly means Muslim) or African.

Although heavy regulation of companies like Uber is seen by many as anti-free market and protectionist, others see it as a necessary measure to ensure that the west isn’t flooded with cheap foreign labor.

“Another way of looking at Uber is as a blunt tool of globalism,” writes Oliver JJ Lane. “Enabling large numbers of migrants (and let us not fool around by presenting for a moment the vast majority of Uber drivers in London aren’t born abroad) to completely undercut the business of, and threaten the livelihoods of thousands of predominantly white, working class Brits who drive taxis.”

Paul Joseph Watson is the editor at large of Infowars.com and Prison Planet.com.

WHY AM I BEING TREATED DIFFERENTLY THAN HUNTER BIDEN and the REV. AL SHARPTON?

Featured At the Store

Get Me Roger Stone