Fired FBI director James Comey and Special Counsel to the Russian collusion investigation, Bob Mueller, are best buddies?  That is a clear conflict of interest!

When acting Attorney General Rod Rosenstein recommended that president Trump fire FBI Director James Comey, he set the stage for a stand-off between the two men, and also for the appointment of Special Counsel Robert Mueller to lead an investigation into Russian meddling of the 2016 U.S. presidential election.  But instead of finding any campaign collusion with foreign agents and Trump campaign officials, the FBI has only found proof of the Clintons collusion to send 20% of America’s uranium to the Russian Federation.

When former FBI director James Comey admitted during his testimony before Congress that he had intentionally leaked details of his conversations with Trump so that he could provoke an independent investigation and the appointment of a special prosecutor, he triggered an investigation into himself that has so far proven that partisan politics is behind the Russian Collusion Delusion.

President Trump has repeatedly represented his displeasure at the appointment of former FBI Director Robert Mueller, who is a known close personal friend of James Comey whom the president recently fired and who is now a witness in the investigation.  Trump shared his feelings about the appointment of Mueller to Fox News, stating, “He’s very, very good friends with Comey, which is very bothersome.”

Robert Mueller was appointed by President George W. Bush and served as the director of the FBI from 2001 to 2013, and then turned the reins over to his protege, James Comey who was appointed by President Obama in 2013 and who ran the spy organization until he was fired by president Trump in May. Both Mueller and Comey are confidants of Trumps most ardent enemy’s.  National news networks and politicians across the country have called for the recusal of Robert Mueller due to the obvious conflict of interest of him investigating the man who fired his friend.

Former Assistant FBI Director James Kallstrom believes that Bob Mueller and former FBI Director James Comey are the best of friends and have been for over two decades. Kallstrom stated in a recent interview, “the relationship presents a conflict of interest which is hampering the Russia probe.  How do you appoint a special counsel who is a longtime friend? It’s a massive conflict of interest.”

Politico journalist Garrett Graff wrote a book about former FBI Director Bob Mueller that described the close relationship between Mueller and Comey as that of a protege and mentor.  He said, “While Mueller technically reported to Comey as deputy attorney general, Comey, two decades his junior, treated Mueller as a close friend and almost mentor. The men had known each other for years as each rose into the small, elite fraternity of prosecutors at the top of the Justice Department.”  Graff reported in the Washingtonian four years ago that “there was only one person in government whom Comey could confide in and trust.” 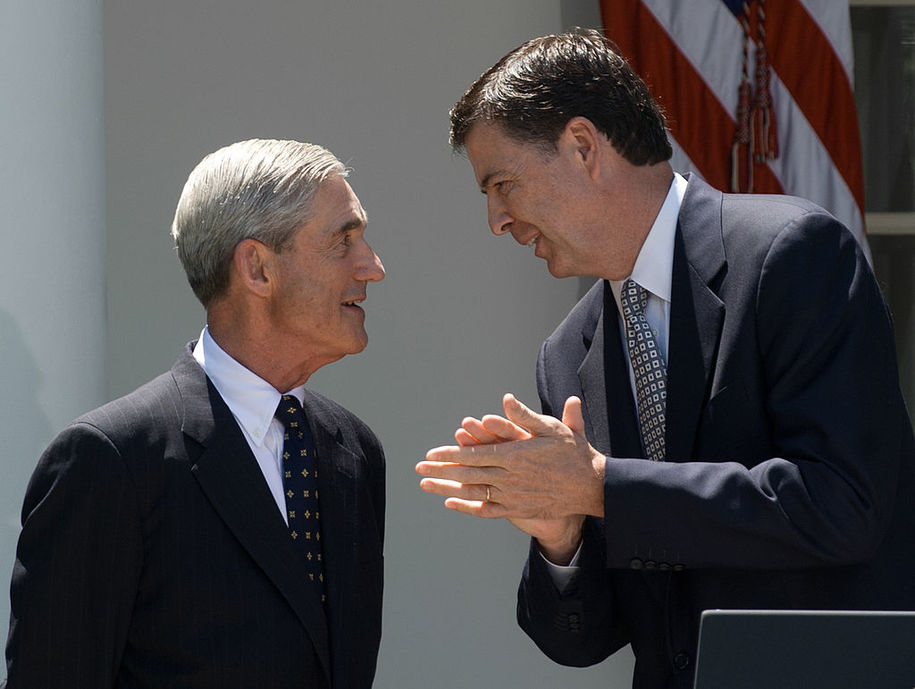 In the 2013 Washingtonian article, Graff noted: “The two men are deeply alike, sharing a background and core principles. Both educated at Virginia universities with a strong public service tradition (Mueller at the University of Virginia; Comey at William & Mary). They both achieved early success in the Justice Department and found subsequent life at private law firms lucrative but unfulfilling. Just years apart in the 1990s, they both gave up their top-tier private law firm jobs to return to the trenches of prosecuting criminals—Mueller as a junior prosecutor in Washington, DC, and Comey in Richmond, Virginia. Both men were rising stars mentored and guided by Eric Holder in the 1990s during Holder’s time in the Justice Department under the Clinton administration.”

Comey attorney David Kelley claimed that the two men know each other from working together as former U.S. Department of Justice colleagues but are hardly considered “best friends.”  He said, “They’ve had lunch together once, dinner together twice, once with their spouses and once after.”  But Arizona Congressman Trent Franks, a member of the House Judiciary Committee, believes Mr. Mueller’s relationship with Mr. Comey should make him ineligible to be the Special Counsel.

Representative Frank said, “Those who worked under them have attested to the fact that Mueller and Jim Comey possess a close friendship, and they have delivered on-the-record statements effusing praise of one another. No one knows Mr. Mueller’s true intentions, but neither can anyone dispute that he now clearly appears to be a partisan arbiter of justice.  Accordingly, the law is also explicitly clear: he must step down based on this conflict of interest.”

Fox News legal expert Gregg Jarrett reported that the U.S. Special Counsel statute mandates that Counsel cannot serve if they have a personal relationship with someone central to the case, and a Justice Department statute states that recusal is necessary when there is the “appearance” of a “personal” conflict of interest.

Civil rights attorney Alan Dershowitz said that President Donald Trump was right to raise questions about special counsel Robert Mueller’s objectivity in the Russia probe because of his longstanding friendship with fired FBI Director James Comey.  Dershowitz said “Comey was determined to get revenge on the president by getting a special counsel appointed.

According to the Federal Bureau of Investigation’s Ethics and Integrity Policy Guide, FBI agents must not act in any manner that would give the appearance of a conflict of interest.

The FBI ethics guide states: “‘Public service is a public trust,’ underlies all aspects of Government service.  The many ethics statutes and regulations discussed in this guide have one fundamental purpose: to ensure that every U.S. citizen can be confident in the integrity of the Federal Government and those in its employ.”

Former FBI Director James Comey wrote the introduction page to the ethics manual so he must be familiar with it.  In his opening letter, Comey wrote: “The rules are based on one fundamental precept: Public service is a public trust. Those of us lucky enough to serve the public in and through this great organization must adhere to that principle in everything we do.” – James Comey.

The FBI Ethics and Integrity Program Policy Guide stipulates that “FBI employees shall endeavor to avoid any actions creating the appearance of unethical activity.”

According to section 45.2 of the FBI Ethics and Integrity Program Policy Guide, Under the heading “Disqualification arising from a personal or political relationship,” subsection (b) states: “no employee shall participate in a criminal investigation or prosecution if he has a personal or political relationship with:
(1) – Any person or organization substantially involved in the conduct that is the subject of the investigation.
And subsection (b) states that an FBI or government employee must not participate in an investigation “that would create an appearance of a conflict of interest likely to affect the public perception of the integrity of the investigation or prosecution.”

Additionally, FBI Director James Comey broke Federal Bureau of Investigation rules when he provided his friend and the New York Times with documents related to the Russian investigation, in an effort to get a special counsel appointed.

In section 4.9.4, on the FBI’s policy on agents speaking and writing to the media, it states, “The work that employees perform for the FBI is frequently of national importance and is, therefore, the subject of great public attention and interest. Nevertheless, each employee has the responsibility to maintain the confidentiality of information learned by virtue of his FBI duties.  Sensitive law enforcement information must not be disclosed in any form without specific prior authorization.  Information is not releasable merely because it is attributed to an unidentified “Federal law enforcement official.” Such disclosures cause serious damage to our investigation and risk unfairly tarnishing the reputation of those involved in these investigations who enjoy the presumption of innocence and are entitled to the due process of law.”

Former special counsel for President George H.W. Bush, Bill Otis said, “Mueller is compromised by the close professional — and I would sure think personal — relationship with Comey, That is an encompassing standard…that should be interpreted broadly so that the public will have maximum confidence in the outcome of the special counsel’s work.”

Hana Callaghan, the director of the Government Ethics Program for Santa Clara University believes that the Mueller/Comey connection could hinder the investigation and cause the public to lose faith in their government.  She said, “A friendship could give rise to the appearance that Mueller was acting out of loyalty to his friend as opposed to the public’s best interest in finding out what happened.“

The purpose of having a “special counsel” is to find an impartial prosecutor from outside of the normal government chain of command because conflicts of interest already exist.  Robert Mueller and James Comey have a longstanding friendship and clear conflict of interest which precludes them from collaborating on the special counsel investigation.

The most ethical and honest approach for Robert Mueller to take is for him to recuse himself from the investigation due to his close professional and personal relationship with fired FBI Director James Comey.

If he does not recuse, then he must be removed.